OVERLAND PARK, Kan. – A metro woman believes her former employer singled her out because of her race during the coronavirus pandemic.

Heather Schlozman, an attorney at Dugan Schlozman LLC, said her client, Nina Nguyen, liked her job at The Taben Group in Overland Park up until March 19.

“They believe that because she’s Asian, she was somehow creating a bigger risk for them to transmit the COVID-19,” Schlozman said.

Documents filed with the Equal Employment Opportunity Commission (EEOC) state that on that day, Nguyen was told to move 6 feet away from her co-workers for safety concerns over COVID-19.

Nguyen claims she was the only person in the office, with a staff of 15 to 100 people, asked to move.

“I think the decision to move Nina from her white co-workers, the only Asian American in the office — I think that decision was grounded in ignorance,” Schlozman said. “They didn’t move anybody else, even a co-worker who had a possible exposure.”

Schlozman said her client complained of discriminatory treatment to Randstad, the staffing agency that helped her get the job, who forwarded the complaint back to The Taben Group, a health insurance agency that merged with Navia Benefit Solutions in April.

When Nguyen returned to work, she was allegedly let go for being “unhappy.” Her lawyer said The Taben Group cited performance issues.

“This was clearly pretext, a lie for what was really going on, which was that they didn’t want an Asian American in their office, and they were ticked that she complained about it,” Schlozman said.

Schlozman said her client was not only discriminated against because of her race but her firing also was retaliation for voicing her concerns, which is why she submitted claims of discrimination on the part of both companies.

“An employer who takes an adverse action, or terminates someone in this case on that basis, clearly implicates the Civil Rights laws,” she explained.

Nguyen, who called the experience humiliating, wanted to share her story in hopes it doesn’t happen to another person.

“I just want this to be something that is not OK, and they know this not OK,” she said.

Schlozman said The Taben Group and Randstad have two options to try and resolve the allegations: They can either take advantage of the EEOC mediation or say nothing, which would give her grounds to file a lawsuit.

FOX4 reached out to both companies and received the following response from The Taben Group/Navia:

“We have received communication from the EEOC and we are working diligently on our response. Navia chooses to keep employee files and details regarding separations confidential.”

We have yet to receive a response from Randstad as of the publishing of this article.

A recent survey conducted for the Center for Public Integrity shows more than 30% of Americans have witnessed someone blaming Asian people for the pandemic.

Unified reopening of Jackson, Johnson and Wyandotte counties may be difficult to achieve

OVERLAND PARK, Kan. -- Two families are safe but a cat is dead after a fire engulfed a duplex on April 2, causing extensive damage, according to the Overland Park Fire Department.

Crews were called to the fire at 83rd and Grandview Lane shortly before 3 p.m. When they arrived, they found everyone was safe outside, but the fire was raging. It took 45 minutes to bring it under control.

Editor's note: The date the kayaker was reported missing was previously misstated and has been corrected.

RILEY COUNTY, Kan. -- First responders have recovered a body near the Tuttle Creek ORV Area after a kayaker was reported missing on May 2.

PULLMAN, Wash. -- A roughly two-inch long insect known as the “murder hornet” has made its way to the U.S. for the first time ever, researchers said.

The Asian giant hornet, Vespa mandarinia, has been known to kill up to 50 people a year in Japan, according to The New York Times. It also has the potential to devastate U.S. bee populations, which have already been declining.

Florida an arrested trying to quarantine on private Disney island

Sam Lloyd, who appeared on ‘Scrubs’ and ‘Seinfeld,’ dies at 56

Billionaire Warren Buffett vows that US will recover from coronavirus

1 dead, 1 injured after semi strikes cars on I-49 near Harrisonville 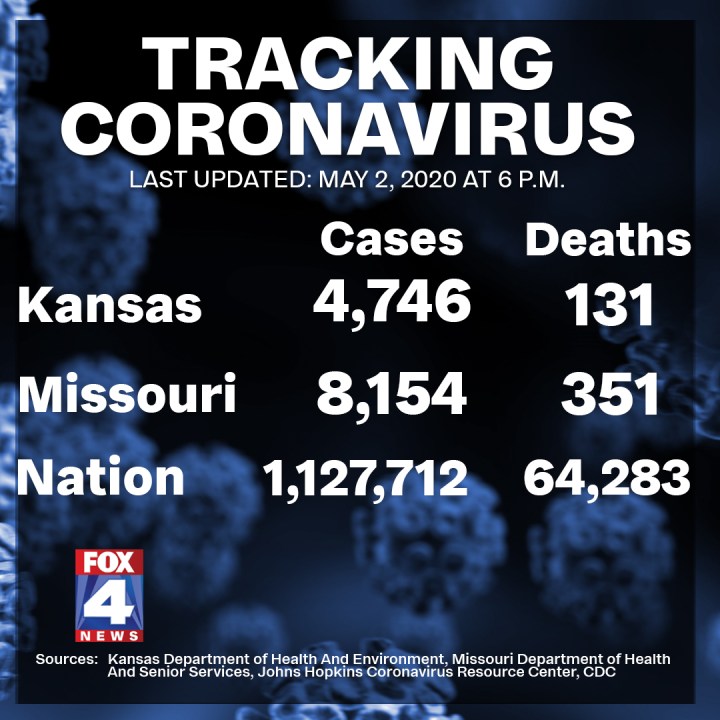 Boater found dead onboard after explosion at Lake of the Ozarks

Need baking supplies? Here’s why stores are often fresh out of flour

Kansas lifting stay-at-home order, limits on many businesses but not all Monday

‘I kept yelling at her to stop’: Witness describes horrific moment when KC woman ran over, killed man Saturday

Kansas City didn’t get a dime in federal stimulus money — but St. Louis got $35 million

Florida an arrested trying to quarantine on private Disney island

Sam Lloyd, who appeared on ‘Scrubs’ and ‘Seinfeld,’ dies at 56