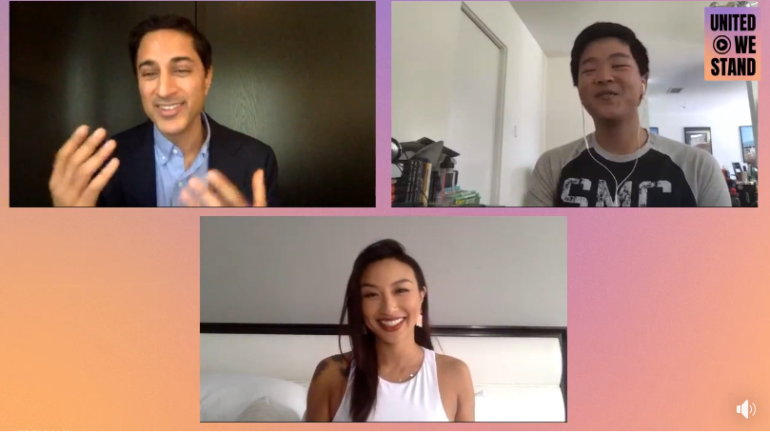 She recalled that her aunt then pushed her aside, proceeded to rub the paint off with a bucket of water and sponge, saying, “Move, I got to get to work.”

Mai was less calmer with injustices in her own life, “getting into fistfights” and expelled from high school.

“I just pushed on through it like my aunt, and it wasn’t healthy for me,” she said. “It made me completely bypass the pain that it caused me… all of this hate built up to a place where I was a side of Jeannie where I’m not proud of today.”

Mai was one of the Asian Americans sharing their personal stories about bullying and hate at Act to Change’s webinar, held on what would have been Vincent Chin’s 65th birthday.

The 1982 deadly baseball bat beating of Chin “echoes” the rash of xenophobic hate crimes amid COVID-19 today, said Maulik Pancholy, co-founder of the nonprofit hoping to end bullying for all youth.

Act to Change’s event, United We Stand, commemorated the second annual Asian American and Pacific Islander Day Against Bullying and Hate, with a star-studded guest list of Asian American public figures. The non-profit, an offshoot of the White House Initiative on AAPIs during the Obama administration, produced the event with the support of 200 AAPI organizations and groups including AsAmNews.

Celebrities such as Fresh off the Boat‘s Hudson Yang, Queer Eye‘s Tan France, Never Have I Ever‘s Poorna Jagannathan, and other media influencers shared their experiences and offered advice to an audience that reached nearly over 600 at its peak.

“It’s important to speak out” about racism, said Mai, now the co-host of The Real. “Just the thought can turn to hate — and as we’re seeing today — death.”

The topic of COVID-19 related hate crimes hung over the webcast, with the first guest, actor Daniel Dae Kim, describing his reaction as “heartbroken, angry, frustrated.”

Kim was hospitalized in March for coronavirus, declaring himself “100%” better during the livestream. But the anti-Asian — particularly Chinese-centered — vitriol from social media and news reports has been far from cured.

“It was a stark moment to me, that we as Asian Americans have been asked to prove our Americanness,” he said. “We are taken to task about events happening a continent away.”

Event host Pancholy agreed. “We are American enough just by being American.”

But as Asian American celebrities shared their stories, not much has seemed to change. Many — from all generations — spoke about their peers and even adults verbally and physically harassing them, while mocking their language, physical features, and the food they ate — something commonly invoked in false statements that accuse Chinese of spreading the coronavirus by eating bats.

The backlash was also a surprise for CNN’s Lisa Ling of This is Life and media entrepreneur Bing Chen, who discussed how Asian American-led productions seemed to be soaring recently, with the climate being “good to Asians.”

“My hope is that it doesn’t get worse for people like us,” she continued, alluding to this year’s Presidential election.

But racial profiling occurred long before the 2016 election, with actor John Cho retelling a story where his co-star Kal Penn kept getting frisked by airport security during their press tour in 2004 for Harold & Kumar, a movie series starring two Asian American leads, a “socio-political breakthrough.”

“We try to rationalize things over time, and maybe tell ourselves that it wasn’t what it was — but it definitely was,” Penn recalled.

A Harvard study confirmed that memory loss and PTSD are symptoms of trauma — and may be reflective of how Asian Americans are raised.

“I think for Asian communities, for immigrants, there’s a sense that everything’s okay,” said Padma Lakshmi, author and host of Top Chef. “Don’t complain, don’t make waves… just pretend that it didn’t happen. But it did.”

She herself endured the societal pressure to be silent about injustices, not only in the greater community, but hers as well, speaking candidly about her experiences with colorism and sexual assault.

Never Have I Ever star Poorna Jagannathan and actress Punam Patel agreed, speaking of a major gang rape and murder case in India, relating it to why diversity in media needs to include all stories, no matter how upsetting.

“We’re usually the punchline and never the plot line,” Jagannathan said. “Our struggles and pain are not represented.”

But when they are, she added, it “creates empathy and acceptance,” especially for those whose stories remain untold, such as immigrants.

Open dialogue and communication are also essential to breaking barriers and upending stereotypes — and not just against Asian Americans, Mai said.

“Chinese versus Filipino, Japanese versus Korean, which race was better?” the Vietnamese-Chinese American said, describing the hierarchical tensions that exist within the community. “Which skin color makes you more richer, the more affluent type?”

“That’s how racism starts,” she added. “You hear it somewhere and it’s taught… You need to address that or stop it if you hear it in your household today.”

Paulik agreed, saying that it is a “big responsibility” to stand in solidarity with all communities — especially in the “recent, horrific murder of Ahmed Arbery,” who was shot and killed while jogging, allegedly, by two White men.

“We all stand united to decry all hate, violence, and racism,” he declared.

Sometimes, stepping into the spotlight is “intimidating,” but that opens the door for others, said Tan France, fashion designer and one of the stars of Netflix’s Queer Eye.

“Nobody wants to be the first,” he said. “But now, I refuse to not be myself. I’m not going to hide that I’m Pakistani… raised Muslim… that I’m gay — I’m finally a person that’s allowed to be in this industry.

“It’s getting better. It really is.”

Be a Bad Ass Asian and Register to Vote